This is the essential revolution to restart lifetime education, everywhere in the world. 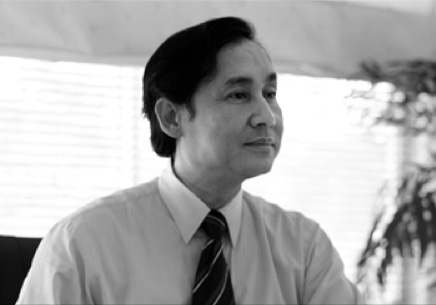 "The Foundation B'Lao was created in France in January 2017, as a milestone of social responsibility where the company is governed by those who build it. The Foundation supports and develops lifetime education that conveys the value of life in that it believes: Break the walls – Reach beyond the limits. I am convinced, by my own experiences, that the social performance, developed by a system of values ​​operating and demanding, declining this basic value, is at the origin of the economic performance and that these two performances feed each other by being the two complementary forces of the same ambition.

Many companies suffer from not recognizing within them the potential of their members and not building inside a value system. So we developed in our company a unique model of continuous training on the organization and governance system, directly inspired by our own value system, which is continuously reinforced. This organization values ​​the contribution of the members - a word that I prefer to "salaried" or, worse, "employee" and that expresses the membership, active contribution, and sharing - the evolution of each member in our group, to the top, does not suffer from any barrier, except himself/herself".

The Foundation B’lao, a unique model

The governance and structuring, pioneering, of the Foundation B’Lao removes the separation between the capital and the labor: it is "social capitalism"

From the former name of Bao Loc - the city where the founder’s parents who were teachers and who wish to engage in lifetime education, reside - the endowment Foundation B'Lao will become in 2018 the key shareholder of the group B'Lao and therefore of the Group Financière B'Lao. It will legally control them and guide their development, based on the values that it supports and that it makes transmit through lifetime education, thus assuming its social responsibility.

Its board of directors - 14 members: perfect parity between men/women - is constituted exclusively of shareholder members elected by the 750 key shareholders of the group.

Each key member is awarded, each year, three years of their remuneration in shares of the company - of the group - to which he/she belongs and which is intended to be listed on the stock market.

The status of key members is reviewed every year and allows for recognizing the deserving member who is exemplary of the values of the group by his/her actions. This status requires.

For each member, regardless of his/her origin and history, the path going to the top, to the Board of Directors of the Foundation B'Lao, is open.

This is the ultimate concrete concretization of the key value that the Foundation B'Lao wants to transmit, which wants to break down the walls and the borders, in short, decompartmentalize.

To support the commitment and performance of its members, the Foundation B'Lao has developed continuous training - education at a stage rarely reached and that is applied to everyone.

The managers are from the field and have been promoted for their skills and committed values that the training has grown and developed.

The result of this educational social commitment = the group got a huge growth of 40% in 2017, exclusively in internal growth, while its previous average annual internal growth was 25%.

In order to promote lifetime education in the regions where the group is setting up, the Foundation B'Lao co-operates with the first training system in place, to strengthen it from the inside, from the kindergarten to the superior education, through professional training. It tries to encourage there the new models of learning and to be an active example rallying other companies to participate in this educational commitment, by starting with those of its facilities, in these regions.

It takes the path.

The companies, with their financial power, starting with the biggest of them, will have to act as co-actors of the lifetime education, in close connection with the educational system and the public sphere in place, in regions where they are implanting. This commitment provides an early solution to revising the teacher and professors’ statutes - financial and social - who must become mobilizers to attract and retain in education the best of us.

This revolution is essential to restart lifetime education, everywhere in the world.

It is the conviction of the Foundation B'Lao that implements it in its own commitment to lifetime education, as an example that triggers a dynamic.

In total, the Foundation B'Lao wants to contribute to the educational "Big Bang", associated with the competitive "Big Bang".

For this purpose, the Foundation B'Lao will organize from 2021 - a tri-annual international award, which will perpetuate, rewarding the significant initiatives - innovations of the connection - for the lifetime education - between the companies - the active social organizations, and the educational systems in place.

The SCAVI where are practiced the values of the Foundation B'Lao

SCAVI, a French - Vietnamese corporation - subsidiary of Group Financière B'Lao, is naturally involved in a system of cooperation and a positive combination of national temperaments. By offering its 12,000 members - from the sewers to the executives - the opportunity to become a key shareholder, the company recognizes the importance of each person in its economic development.

Its large system of continuing education and training enables access to education for all in the poor areas and the development of all the potentialities that only the sharing of knowledge allows.

Human resources are the main asset of a company and they must be fed at the best. In Hue, for example, the Scavi group has signed a five-year apprenticeship contract for the benefit of the 1,000 students, especially with the faculty of economic sciences of Hue, the local University Institutes of Technology (IUT in French), the Hue Normal School (the best selective and prestigious school), and the vocational schools specialized in some professions of the group. The group is innovating, in this field, by setting up an open-ended education committee that brings closer the teaching staff of these schools and the senior managers of the group in charge of the internal continuing education. This committee strives for the continued reconcilement between the academic training programs of the concerned schools and universities with the organization system of the group, in order to reinforce the efficiency of learning, covering all the group's professions.

It is an unprecedented, demanding, indispensable activity.
For many years, Scavi has multiplied its apprenticeship partnerships with the schools and universities where its companies are located. It will be gradually expanded by companies controlled by the foundation B'Lao in their respective regions.

The first step before the opening of a primary school, a college, and then a university in 2030, the B'Lao kindergarten was inaugurated on August 25th, 2017 in Phong Dien - Hue, next to the biggest industrial center of the Scavi group. It welcomes about 200 children from eighteen months to five years with more than twenty members work full time here. In the long term, it will be able to welcome 600 students.

In a disadvantaged region, it is the commitment‘s concretization of the foundation for lifetime education: open to the children of Scavi group’s members, regardless of their professional position in the company, it also welcomes, for 10% of the students, the students in the region, mainly from parents who have a difficult social situation.

On 7,300 m2, it has its own pool, several playgrounds, a music room, a room equipped with PC computers for digital initiation, and a library. On the whole, for the cost of one year in the cheapest public kindergartens: the scholarship is almost total and its monthly level is equivalent to 80% of the average salary of Scavi group’s members working in the industrial center of Hue and is superior to the local minimum salary.